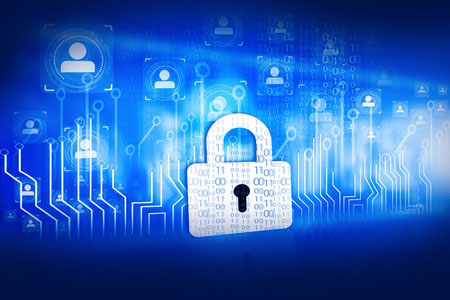 Preventing data privacy breaches is becoming increasingly important, with the increasing costs of dealing with cyber attacks, IT security breaches, and the subsequent legal actions and regulatory investigations. Strong IG, including privacy governance, is the most effective way to put in place robust systems to prevent and minimise privacy breaches, as well as respond to any privacy breaches that may occur.

There is general awareness of the increase in cyber security attacks on organisations, and the significant risks that this poses to enterprise information security, legal and regulatory obligations, as well as the significant costs and reputational issues that result.

It is regularly reported that cyber attacks and data breaches are on the rise. The Identify Theft Resource Center Breach reported that US data breaches hit a record high of 783 in 2014, which was a 27.5% increase over the previous year, with over 85 million records exposed.[i]

Telstra’s Cyber Security Report[ii] states ‘nearly a quarter of all the organisations we surveyed had suffered some kind of business interruption due to an IT security breach during the last 12 months. When that time frame was stretched to five years the figure climbed to nearly 60%. … The majority of Australian organisations we surveyed reported that they detected some sort of attempt to breach their IT security on a weekly or monthly basis.’

The costs of a data breach will depend upon on its type and scale. However, for some large-scale breaches, the costs may run into hundreds of millions of dollars.

The direct costs of data breaches include the following:

There are also the indirect costs arising from data breaches, such as loss of reputation and potential loss of future customers, due to a lack of trust that customers’ personal information will be kept safe.

In the US, Target reported in late 2014 that it had incurred $248 million in data-breach-related expenses and would receive $90 million from insurance policies.[iv] This included costs for defending or settling more than 100 legal actions against it. Independent sources estimated that fraudulent charges ranged from $240 million to $2.2 billion. [v] In March 2015 a US court gave preliminary approval to a $10 million settlement of a class action to enable customers affected by the breach to be awarded up to $10,000 each in damages.[vi] In April 2015, Target announced it had reached agreement with Mastercard to fund up to $19 million in payments to Mastercard issuers affected by the data breach, conditional on at least 90% of card issuers accepting the offer.[vii]

Home Depot reported it had paid $43 million in data-breach-related expenses and anticipated $15 million in insurance payments, and that at least 44 legal actions had been filed in the US and Canada.[viii]

Globally regulators are imposing stiff sanctions and fines for data and privacy breaches. In addition to fines, regulators often impose requirements for organisations to conduct reviews, audits and provide ongoing compliance reports to the regulator. This can be a substantial ongoing cost, particularly where it may involve the unbudgeted expense of new or improved IT, increased cost of appropriately qualified personnel, particularly privacy experts and/or independent third-party audits, and ongoing compliance reporting.

In the US, in April 2015, AT&T was fined $25 million for a data breach by the Federal Communication’s Commission in its ‘largest privacy and data security enforcement action to date’.[ix The data breaches involved the unauthorised disclosure of almost 280,000 of customer names, full or partial security numbers, due to employees accessing without authorisation customer records at AT&T call centres in Mexico, Colombia and the Philippines. Under the terms of settlement, AT&T is required to appoint a senior compliance manager, who is a certified privacy professional, to conduct a privacy risk assessment, implement an information security program and provide regular training to employee’s on AT&T’s privacy policies.  AT&T is required to file regular compliance reports with the FCC.

In the UK in 2012, the Brighton and Sussex University Hospitals NHS Trust received the largest-ever fine imposed by the Information Commissioner’s Office (ICO), of £325,000. A contractor had been retained to destroy data on around 1000 computer hard drives containing confidential patient information.  An individual sub-contractor removed some of the hard drives and without wiping the drives sold them on eBay.

In 2013, the ICO imposed a fine of £250,000 on Sony Computer Entertainment Europe, following a cyber attack on the Sony PlayStation Network Platform in April 2011 that compromised the personal information of millions of customers.

In 2013/2014 the ICO issued £1.97 million civil monetary fines.[x]  The fines levied in the UK are set to increase once the new EU General Data Protection Regulations are enacted.

The draft Data Protection Regulation was issued in 2012, and the EU’s European Council is aiming for its adoption in late 2015 or early 2016. After a transition period of two years, it will have immediate effect on all EU member states.

The draft EU Data Protection Regulation provides for sanctions and fines as follows:

The powers of the Office of the Australian Information Commissioner (OAIC) include:

The first enforceable undertaking under the new privacy laws that came into effect in Australia in March 2014 was entered into by Optus in March 2015, following a lengthy investigation by the OAIC. It was concerned that Optus did not have reasonable steps in place to safeguard the personal information held in its systems at the time the three significant incidents occurred, and as required by Australian Privacy Principle (APP) 11. The three incidents were:

The Privacy Commissioner referred to the positive way in which Optus worked with the OAIC to address the incidents, and considered ‘the enforceable undertaking was an appropriate outcome that will ensure Optus takes steps to strengthen its privacy controls and meet its security obligations under the Privacy Act’.[xii] The enforceable undertaking required Optus to:[xiii]

In light of the costs and time involved in responding to data breaches and the subsequent ongoing consequences and expense, there is a strong incentive for organisations to ensure they have an appropriate privacy framework in place, both to prevent privacy breaches and to respond to any data and privacy breaches that may occur.  As part of good corporate governance to manage risk, the privacy framework should be part of a robust overall information governance framework to manage all information and data throughout an organisation.

The New South Wales Information and Privacy Commission, which covers state public sector agencies, has published a Privacy Governance Framework.[xiv] The framework enables a holistic organisational approach to the management of personal information, draws upon the ‘privacy by design’ principles, and consists of five elements (as shown in the diagram below): setting leadership and governance; planning and strategy; program and service delivery; complaint incident management; and evaluation and reporting. 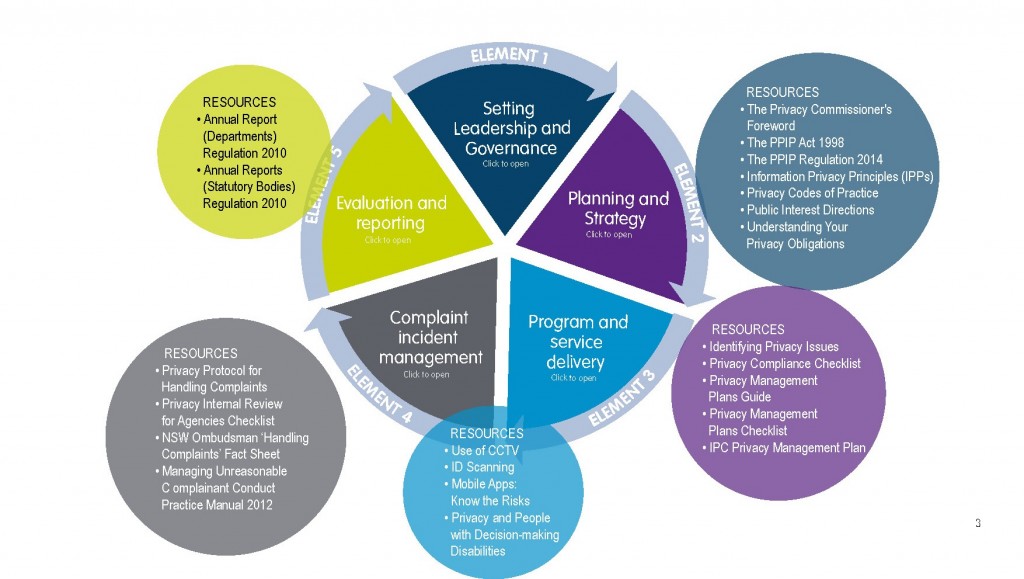 The objectives of ‘privacy by design’, developed by Dr Ann Cavoukian, former Information and Privacy Commissioner in Ontario, are aimed at ensuring privacy and gaining personal control over one’s information, and, for organisations, gaining a sustainable competitive advantage. The benefits of the ‘privacy by design’ approach has been recognised by information and privacy regulators, including in the United Kingdom and Australia. The seven foundation principles are: [xv]

The privacy by design approach is about proactive, rather than reactive, measures. It anticipates and prevents privacy-invasive events.

It seeks to deliver maximum privacy, by ensuring that personal data is automatically protected in any IT system or business practice. No action is required by an individual to protect their privacy – it is built into the system, by default.

Privacy is embedded in the design and architecture of IT systems and business practices, rather than being an add-on. Therefore, it is an essential component of the functionality.

Privacy by design seeks to accommodate all legitimate interests and objectives in a positive-sum ‘win-win’ manner, not through a zero-sum approach, with unnecessary trade-offs. It demonstrates it’s possible to have both privacy and security.

Having been embedded in the system before the first element of information being collected, privacy by design extends throughout the entire lifecycle of the relevant data. This ensures that at the end of the process, all data is securely and quickly destroyed.

Privacy by design means that, whatever business practice or technology is involved, it is operating according to the stated promises and objectives, subject to independent verification. Its components and operations remain visible to users and providers alike.

The ICO has set out the benefits of designing projects, processes, products or systems with privacy as a consideration at the outset:[xvi]

It is clear that the most efficient way to ensure privacy protection is for it to be included and embedded in the early stages of any project or new product or service, and for this to continue throughout its lifecycle.  The ICO recommends that privacy and data protection be considered when: [xvii]

While it is important to have a strong privacy framework, it needs to be supported by robust information management and governance throughout the organisation. The NSW Privacy Commissioner states, ‘[p]rivacy is easiest when it is the organisation’s standard mode of operation and monitoring is mainstreamed through existing governance mechanisms such as the Board, Executive of Senior Management meetings. Monitoring and review can be achieved through existing mechanisms such as the Audit and Risk Committee or Customer or other Advisory Committees.’[xviii]

The Information Governance Initiative describes IG as a co-ordinating list of information activities, including information security, compliance, data governance, risk management and privacy.[xix] IG is defined as: ‘the activities and technologies that organisations employ to maximise the value of their information while minimising associated risks and costs’.[xx] 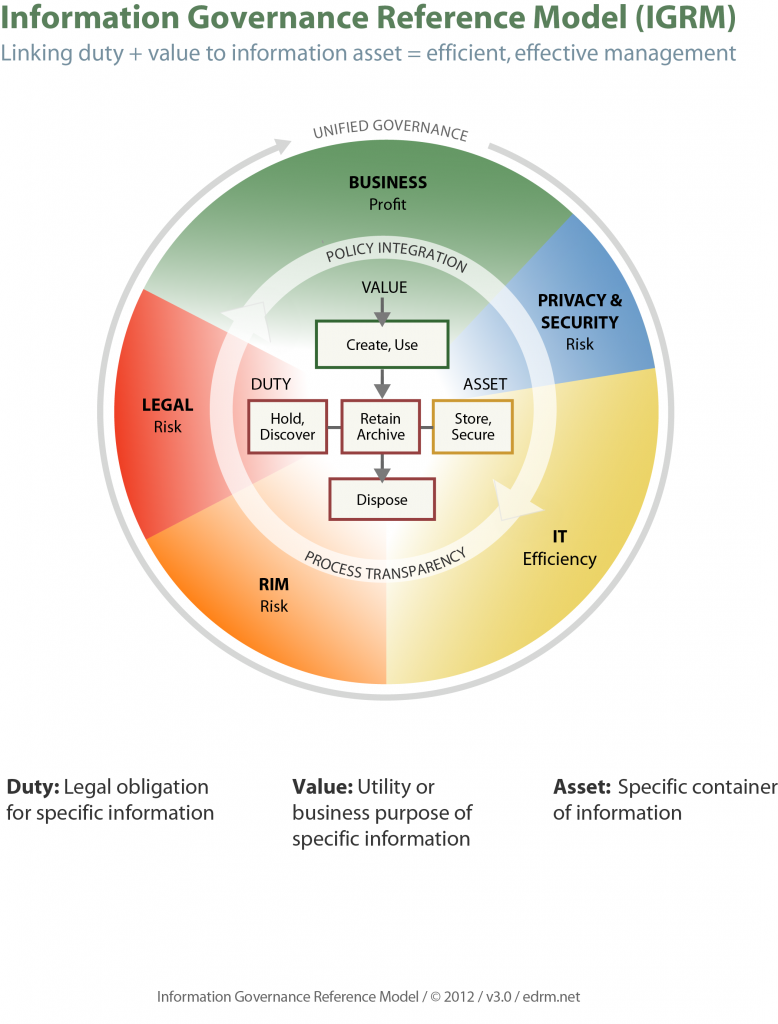 The Information Governance Reference Model (IGRM) provides a framework for defining a unified governance approach to information, including privacy[xxi]. It shows information is a cross functional challenge, requiring collaboration between the various stakeholders within an organisation (i.e., privacy, information technology, legal, records management and business units), and highlights the intersection and dependence across these stakeholders.

The benefits of a holistic approach to IG, including privacy governance, are:

Having a strong privacy and information governance framework properly embedded in an organisation should prevent and minimise privacy and data breaches.  To have robust governance, consider:

[xi] Article 79 of Regulation of the European Parliament and of the Council on the protection of individuals with regard to the processing of personal data and on the free movement of such data (General Data Protection Regulation), Inofficial consolidated version GDPR, Rapporteur Jan Albrecht, October 2013.